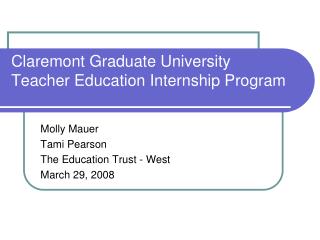 You’ve Got a Great Teacher Education Program so Why Doesn’t Anyone Know About it? - . mark girod chair, teacher

The Federal Internship for Newcomers – The Graduate Advantage - . looking for professional, experienced help?.

[University] Internship Program in Madrid - . [term year]. what we ’ re going to talk about:. the eusa team why madrid?

NCC Graduate Program Orientation Teacher as Leader in Curriculum and Instruction - . a gateway to lifelong learning.

Graduate Education at the University of Illinois - . senior administrator orientation august 17, 2006. importance of