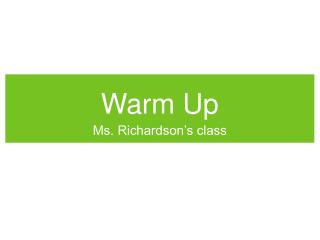 Warm Up. Ms. Richardson’s class. Warm up: 8/23. Type: Journal Entry Write three, well thought out, paragraphs about what you did this summer. Be sure to include correct grammar and punctuation. Use details. Warm up 8/24. Correct the following sentences: 1. the boy want to go to the Park Warm Up: - Weekly learning target : i can analyze character development through textual evidence. date: 1/8/14 aim: what

Warm Up - Wednesday, january 15 th. warm up. simplify each expression 1. 2. joke of the day. what did the surfer say when

Warm-Up - . using the lines on a piece of paper as a guide, draw a pair of parallel lines. now draw a transversal that

Warm-Up - . and speaking of the final frontier, what do you think is the shape of space?. 4.1 apply triangle sum

Warm Up - . problem of the day. lesson presentation. lesson quizzes. warm up 1. find the surface area of a square pyramid

Warm Up: - . octet rule. a filled layer contains 8 electrons exceptions (after bonding…) h and he will have 2 beryllium

Warm Up - . problem of the day. lesson presentation. lesson quizzes. warm up complete each sentence. 1. angles whose

Warm Up - Preview. warm up. california standards. lesson presentation. warm up 1. find the slope and y -intercept of the

Warm Up - . have out your decoding the constitution worksheet prepare for notes. know this for the quiz fo’ real!. warm