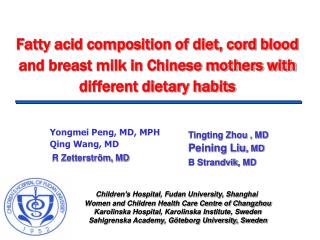 Lactogenesis and Composition of Breast Milk - . i. general information a. embryologically: belong to integument b.

Fatty Acid - A fatty acid is nothing more than a long c-h chain with a carboxyl group (cooh) on the end. the cooh gives

What is banking cord blood and cord blood? - Cord blood shortly known for umbilical cord blood is that special blood that

Composition of Blood - . blood is the body’s only fluid tissue it is composed of liquid plasma and formed elements

Composition of blood - . there are 4 different types of blood cell in humans. arteries, capillaries and veins. cross

Wonders of Breast Milk - Breast milk, undoubtedly, is the best food that you can give to your baby. however, apart from