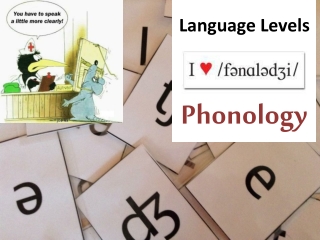 Language Levels. Phonology. JABBERWOCKY ’Twas brillig , and the slithy toves Did gyre and gimble in the wabe ; All mimsy were the borogoves , And the mome raths outgrabe . ‘Beware the Jabberwock, my son! The jaws that bite, the claws that catch! Levels of Language - 9. levels of language. formal and informal. topic preview. before listening. listening. after

Language Functions Across Proficiency Levels - . use words or phrases related to weather from pictures or photographs.

Hitting the Target Language at All Levels - . what are some challenges that you face in keeping your classroom in the