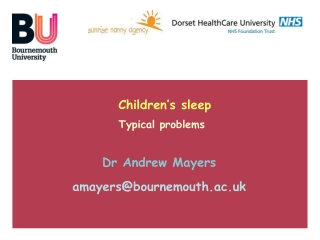 Sleep and Aging - . meredith broderick, md april 2, 2008. sleep and aging. how does sleep change as we age? do we need

UNDERSTANDING AND MANAGING CHILDREN’S SLEEP - . aims of this session. to raise awareness of the sleep processes to look

Sleep and Sleep Disorders - . mental health center of west china hospital. question. how do we know about sleep?. what is

How Much Sleep Do Students Actually Need? - . november 8, 2013. suggested hours of sleep. variability based on the needs