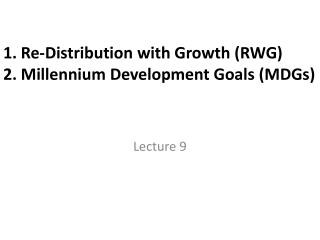 Requirements Working Group - . the rwg charter is being the acknowledged leader in advancing the state of the theory,

Private Sector Steps Towards Meeting the MDGs - . september13, 2005. summary of presentation. introduction what is csr?

Planning and Budgeting for the MDGs - . presented by allen schick conference on public sector management in support of

Dusit Hotel, Makati City October 19-21, 2011 - Why gendered mdgs? mechanisms for engendering the mdgs at the local

Tracking &amp; Reporting the MDGs: StoriesThat Must be Told With Color &amp; Impact - . by malou mangahas. the