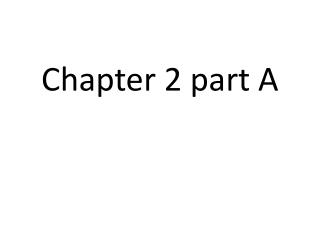 Chapter 2 part A. Chemistry – scientific study of matter Matter – anything that has mass and occupies space There is a difference between mass and weight Mass – quantity of particles – when quantitate the number of particles per some unit volume- that is Density.

Geico commercial - . i’ts funny and it’s true!. part 1. why are thu people so sad like chicken without thee leg?.

Chapter 14 Part 1 - . the brain and cranial nerves lecture outline. introduction. the brain is the center for registering

Chapter 6, Process Synchronization, Overheads, Part 1 - . fully covering chapter 6 takes a lot of overheads. not all of