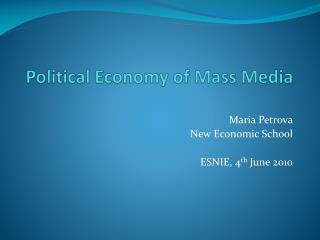 The Political Economy - . “the economy”. it is not a monolithic institution – it is a collection of billions of

The Mass Media and Politics - . chapter 7. into the thick of it. what do we typically see on political talk shows? what

The Mass Media - . chapter eight; section four. the role of mass media. the mass media include those means of

What is Political Economy? - . definitions by prime theorists origins in economic thought how has it been taken up in

Media Change and Civic Activism: From the Cultural Revolution to the Internet Guobin Yang - July 11, 2013 east-west