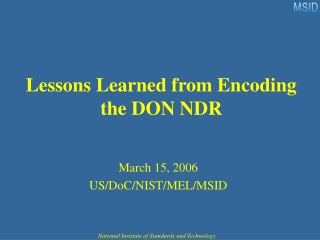 Lessons Learned from Encoding the DON NDR. March 15, 2006 US/DoC/NIST/MEL/MSID. Outline of the Talk. Who we are What we are doing: NDR encoding project What we’ve learned Recommendations Demonstrations: Quality of Design Tool Validation Page Where we are going Discussion. LESSONS LEARNED FROM - . rev. bill brewer. why study this book?. “blessed is the one who reads aloud the words of this

Lessons learned from SMEI - . and their potential implications for wasss b.v. jackson &amp; a. buffington 12 may

LESSONS LEARNED FROM ORGANIZATIONS - . we are living in times of constant change here you will see three lessons

Lessons Learned From Israel - . joshua 6-7. the walls of

Lessons Learned From the ICANN Process - . &amp; from the icann-critique process…. a. michael froomkin u.miami