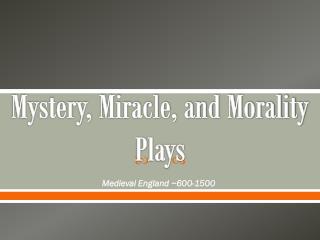 Mystery, Miracle, and Morality Plays. Medieval England ~600-1500. Historical Background ~800-1200. After the fall of Rome, many historical and cultural artifacts disappeared; drama being one of them The Roman Catholic Church became the governing force Medieval Mystery Plays - . contexts for the miller’s tale. what is a mystery play?. a series of dramatic reenactments

Mystery, Miracle, and Authority: The Riddle of Rasputin - . rasputin and popular culture. arc of inquiry. scholarly

Ethics and Morality - . the words. morality , from latin moralis (custom). actions are moral if they are “good” or

Ethics and Morality - . computers and society. notice: this set of slides is based on the notes by professor guattery of

Morality and Ethics - . where does morality come from?. is it wrong to kill an innocent person for no good reason?. if

Morality and Consequences - . agenda. our question different kinds of answer consequentialism : the contingency of right

Evolution and Morality - . some history &amp; some arguments…. evolution as anti-moral. many victorians (and

Morality and Everyman - . mr. mcilvain. how do we decide what’s right and wrong?. options natural law: an ethical

Morality and Ethics - . tutorials. tutorials have started. if you haven’t signed up, sign up today at: