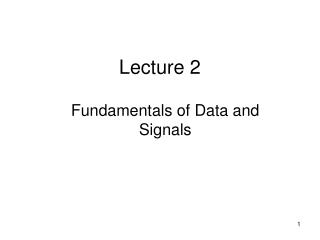 Lecture 2. Fundamentals of Data and Signals. Objectives. In this lecture, we explore the following telecommunications concepts: Different between data and signal Four combination of analog and digital applications Signals. (to p4). (to p8). (to p3). Signals. Properties Analog Digital Quality Assurance In Higher Education with special reference to NAAC - . raf. the revised naac process is being adopted

Lecture 2 - . worldviews and philosophy introduction to plato the issue of the gorgias plato’s arguments and his theory

LECTURE 2 - . the beginning of the english language. plan. 1. people who were the ancient inhabitants of britain? the

Lecture 2 - . genome classification and structure. the size of viruses. how are viruses classified? . for the first 60

Lecture 2 - . exchange rate determination. some basic questions. why aren’t fx rates all equal to one? why do fx rates