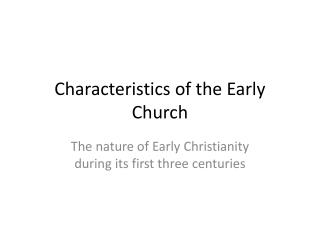 Characteristics of the Early Church Characteristics of the Early Church

The witness of the church in Judea and Samaria 18:23 – 21:16 - . the orchestrated power of the progressive witness of

How to Print - . reference books. marks of the church founded by christ. one holy catholic and apostolic church. the

Illinois General Assembly of the Church of God 08 February 2014 - . the church of god: changing. changing the world. the