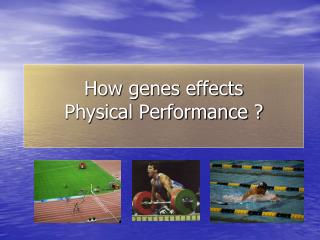 Fault-detection in Ambient Intelligence based on the modelling of physical effects - Phd thesis defense. fault-detection

Employee Attitudes and Their Effects - . by burak cenk adalan 064553. chapter objectives. the nature of attitudes and job

Ergogenic Aids - . what is an ergogenic aid?. use of any item to improve physical work capacity or athletic performance

Physical, Emotional and Cognitive Effects of Stress - . factors in health and illness. psychological factors and health.

Microarrays for Gene Expression Analysis - . questions: what genes are expressed in this tissue under these conditions?

Lesson Overview - . 12.1 identifying the substance of genes. think about it. how do genes work? to answer that

administration of the apft - Apft - 2. the apft is a three- event physical performance test used to assess muscular