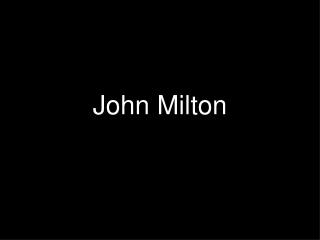 John Milton and Paradise Lost - . john milton. one of the greatest poets of the english language wrote political

Milton’s Excellent Adventure Learning About the Earth - . resource page. once upon a time, in the village of ballston

John Milton, English History, and Paradise Lost - . james i dates: . 1603 – death of elizabeth and ascension of james i