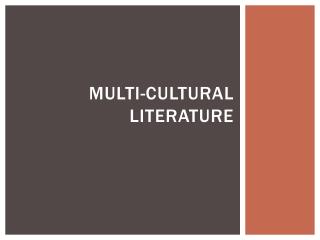 Multi-cultural literature. Warm Up. Read the passage and identify all clauses. Multi-Cultural Teaming - . the joys and challenges of teamwork. biblical basis for multi-cultural teams. the concept of

Multi-cultural open mic night - . come &amp; celebrate your heritage with us!. there will be: poetry food drinks