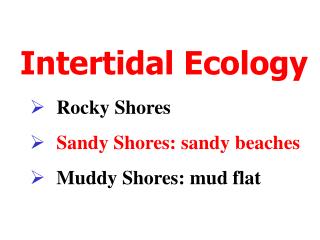 Intertidal Ecology. Rocky Shores Sandy Shores: sandy beaches Muddy Shores: mud flat. Divisions of Ocean environment. Where? Who? What are they doing there?. Why did these students have to stand in water to do the work?. Mixed, semidiurnal, and diurnal tide curves. Intertidal Ecology.

Pioneering Polymaths in Ecology, Biogeography, and Palaeoecology - . john birks. the past is a foreign country – david

Scales and Scaling in Biology and Ecology - . mathematical models of dynamics and control of environmental change,

Ecology - . in your mind, picture organisms that you think may live in a forest. then, write about one of the organisms.