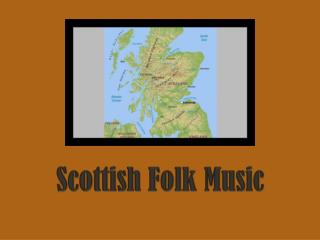 Scottish Folk Music. History. In the 11 th Century AD, the Scots were composed of the Celts, Britons, Picts , and Angles. Influences from Rome (St Ninian who founded the Celtic Church) The harp has led some to think there were Oriental influences. English Folk Music - . ideas and conception. folk music . folk music recounts or reveals the history of a culture in a

Armenian Folk Music - . it is more than 3000 years old. entered a new phase in the second half of the 19 th century based

American Folk Music - . what is it? where did it come from? what can we learn from this type of music?. what is folk

History of Folk Music - . what is folk?. definition of folk? relating to the traditional art or culture of a community or

Arabic Folk and Popular Music - Music may be performed

Irish Folk Music and Session Culture - . why my interest?. newfoundland music irish flute social nature of the music can