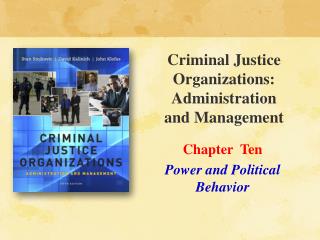 Criminal Justice Organizations: Administration and Management. Chapter Ten Power and Political Behavior. Learning Objectives. Understand a definition of power as being both an individual construct and an organizational construct. Distinguish the various types of authority and power. What Works and What Doesn’t in Reducing Recidivism: The Principles of Effective Intervention: - . presented by: edward

Introduction to the Criminal Justice System - . who am i???. dr. art jipson, ph.d.,sociology and criminology. bowling

THE CRIMINAL LAW SET-UP - . charging the defendants with criminal offenses. 1. based on these facts is there anything

College of Adult Professional Studies CRJ 281 Principles of Criminal Justice - . freedom from crime is not free. the

What Works and What Doesn’t in Reducing Recidivism: The Principles of Effective Intervention: - . presented by: edward

Chapter 8 The Administration of Justice - . the american court structure. the u.s. has a dual court system . dual court.

The Economics of Crime and Justice - . johnny cash at folsom prison, 1968. topics. prisons in america correctional