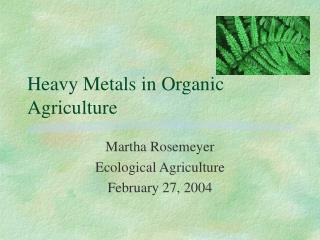 Heavy Metals - . ellen chittester. antimony. antimony is also identifiable by its symbol ab, and its atomic number 51 on

Heavy Metals - . iron. ingestions of pediatric multivitamin formulations are the most common iron exposures. iron. these

Heavy metals migration - . 4(iii). aims. (i) to understand the distribution of heavy metals in the environment and

Heavy Metals in Boxboard Inks - . sarah wood. supervised by: dr. kenneth overway. what?. why?. who?. how?. basic

Organic Agriculture - . a future trend for better health and environment. “the birthright of all living things is

Organic agriculture - . bulgarian team. land use . over 25.6 hectares of the territory of bulgaria, or about 3 % of