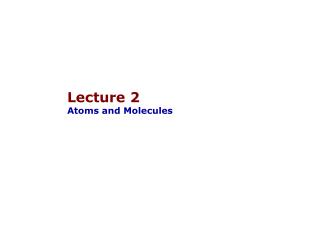 Lecture 2 Atoms and Molecules. Atoms. Matter is any substance in the universe that has mass and occupies space All matter is composed of extremely small particles called atoms. Every atom has the same basic structure Core nucleus of protons and neutrons Orbiting cloud of electrons. Organic and Biological Molecules - . chapter 22. organic chemistry and biochemistry. the study of carbon-containing

Chapter 2 Atoms &amp; Elements - . general chemistry i t. ara. a. atomic structure. although much of daltonâ€™s

What Would You See if you Were On a Nucleus? - . topics for today. elements and atoms and molecules, oh boy inside the