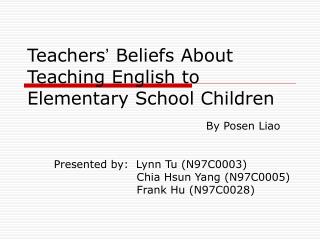 Teachers’ Knowledge, Beliefs, and Values about Children with ADHD - . judy a. liesveld august 16, 2007. background for

TEACHING ENGLISH TO CHILDREN - . author unknown…. masoud hashemi. why do we teach children a new language ?. a better

Teaching PE in Elementary School - . supervision workshop for multiple subject student teachers and interns. have you

Teaching Your Teachers About Technology - . turning this…. into this…. a lesson in four parts:. why don’t more

Special Education Teachers, Kindergarten and Elementary School - . ansley hicks. to be a special education teacher for

TEACHER BELIEFS AND ATTITUDES ABOUT TEACHING - . discuss the following statements. do you agree with your colleagues or

TEACHING ENGLISH TO CHILDREN - . chapter 3 listening. nobody spends a whole lesson listening, and we are not suggesting