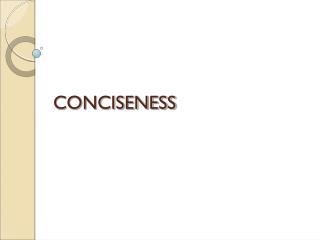 CONCISENESS. What is conciseness?. We obscure the real potential in our sentences by being wordy. Writing becomes too abstract, uninteresting and difficult to understand. Conciseness - . how to say more with fewer words. the information in this presentation is from the purdue university

Conciseness - Concise- adjective giving a lot of information clearly and in a few words; brief but comprehensive.

Conciseness - . the art of amazing writing. definitions ( www.thefreedictionary.com ):. concise - expressing much in few

Conciseness - . say what you mean to say. parallel structure. when writing in a series, use the same pattern of words to

Editing for Clarity and Conciseness - . how to: tighten sentences, use strong verbs, omit jargon, and make every word

Conciseness: Methods of Eliminating Wordiness - Brought to you by the purdue university online writing lab . conciseness: