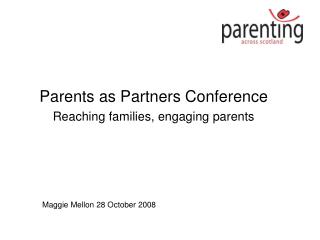 Parents as Partners - . new parent orientation. lbhs: a caring community where people belong and excel. a guide for

PARENTS AS PARTNERS - . supporting your student’s career success towson university career center. what are your

Engaging Parents - . e-resources for schools and districts to bring parents “back to school”. esea program

Parents As Partners in Schools - . how you can be the key to your child’s success in school!. what does parent

Year 10 Parents as Partners - . science department. to be successful in science. what do i need to know? what will

Parents as Partners in Education - . once upon a time, when i was in school…. shifts in teaching and learning….

Engaging with Parents - . the power of information, responsiveness to parental need, and ongoing support for the enhanced

Parents as Partners— Parent/Teacher Talk - . words and phrases that empower by margaret king-ahmed. parents as partners

Parents as Partners— Parent/Teacher Talk - . words and phrases that empower by margaret king-ahmed. parents as partners

Engaging Parents and Teens - . ver. 19.9.2. introduction icebreaker. name favorite thing you did as a teenager. list the