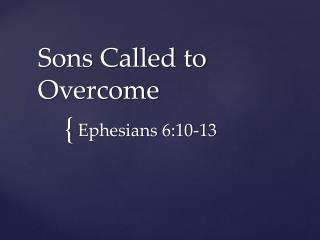 They called themselves THE SONS OF LUCIFER THE ILLUMANITI !! - Chart of the book of revelation. t h e e n d t i m e s.

HOW TO OVERCOME ? - . the energy crisis in karachi by kunwar moeez khan. present situation. kesc should have their own

Called to Wholeness - . discovering scripture. what is the bible and why is it important?. the word bible comes from the

Called to Community - . the_true_meaning_of_dogsledding.wmv. unit 01 chapter 02. christian lifestyles. who are you?. a

FROM CHILDREN TO SONS - . god desires that we grow in maturity from the spiritual state of being children of god to sons

Called to Serve - . 1. called to serve him, heav’nly king of glory, chosen e’er to witness for his name, far and wide

Called to Holiness - . as revealed to us by jesus. jesus reveals god’s call to us. the sermon on the mount a collection

Called to Missions - . all believers are called: bethany has answered the call. (isa 6:8) role? shining the light of

Called to Journey - . we will investigate what it means to be ‘called to journey’ through an examination of your

Called to Serve - . reaffirming the lordship of christ in my life as i fulfill my place in the body of christ . called