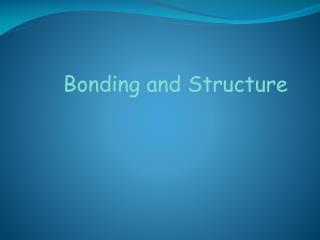 Bonding and Structure. How atoms bond together. The bonds between atoms always involve their outer electrons. Inert gases have ____ outer shells of electrons and are very __________.

Lecture 15 February 8, 2010 Ionic bonding and oxide crystals - . nature of the chemical bond with applications to

Chapter 6 -Chemical Bonding - . batrachotoxin. a steroid alkaloid derived from skin secretions of the phyllobates and