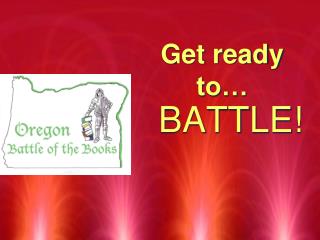 Get ready to…. BATTLE!. Oregon Battle of the Books. The Basics. There are special roles, procedures, and rules for the battle of the books team members. Teams are usually made up of four members with one optional alternate, for a total of five members. Are you ready for your role- plays? - . 110 questions which you need to say yes to before your speaking exam foundation

Are you ready for your role- plays? - . 100 questions which you need to say yes to before may 6 th foundation 1-60 higher

Are You Audit Ready? - . presented by donna collins milestone professional services. are you audit ready?. things that

Get ready for Marketing 2020 - The 2020 consumer is coming fast. companies need to get ready for a new form of marketing.

Are You Ready? - 2014: health care reform requirements and opportunities. are you ready?. presented by: carl pilger

Are you Ready for Leading in the 21st Century - . it isn’t just “coming”… it has arrived! and schools who