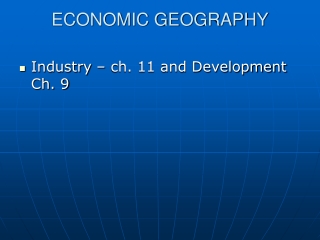 ECONOMIC GEOGRAPHY. Industry – ch. 11 and Development Ch. 9. Econ Geog. Economic Geography: study of flow of goods and services across space Look at ways in which people provide for themselves across the globe Geographic patterns of inequality at different scales Economic Geography - . ch 4 section 5. economy. consists of the production and exchange of goods and services among a

Economic Geography - . question: how are economic activity and level of development interrelated?. levels of economic

Economic Geography - . economic activities. economic geography deals with how people earn a living and use resources and

5 Themes of Geography - M r. h e l p. 5 themes of geography. movement. how do people, ideas, etc. move from one place to

Chapter 12 The Economic-Geography of Energy - . introduction energy in the international arena: trade and geopolitics the