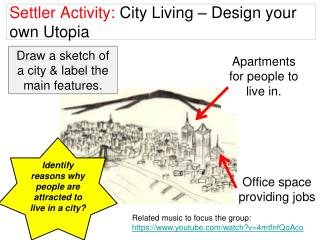 Apartments for people to live in. Settler Activity: City Living – Design your own Utopia. Draw a sketch of a city & label the main features. Identify reasons why people are attracted to live in a city?. Office space providing jobs. CITY OR COUNTRYSIDE ? WHAT IS A BETTER PLACE FOR A FAMILY TO LIVE ? - . more than 35 % of the world population live in

Living Spaces - . lee warstein. we must improve our product range. press shift + enter from the keyboard. we. you. 1”.