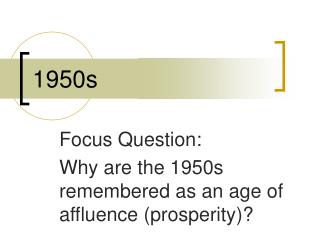 The Golden Age of the Automobile – the 1950s in America

Describe efforts to end segregation in the 1940s and 1950s. Explain the importance of Brown v. Board of Education.

The World Bank - . working for a world free of poverty . agenda. history what is poverty? world bank’s role structure

THE POSTWAR BOOM - . the american dream in the 1950s. section 1: postwar america. after wwii, returning vets faced a

Gender and Educational Achievement - . in this presentation i shall distinguish broadly between two broad time periods:

The 1950s-A Social History - . the economy and mass consumerism demographics movin’ on the ‘burbs consensus and