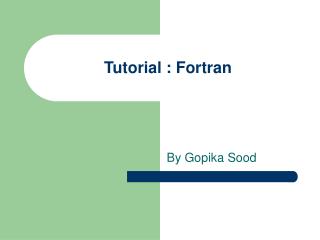 Tutorial : Fortran. By Gopika Sood. What is fortran ???. Fortran is a general purpose programming language, mainly intended for mathematical computations in e.g. engineering. Fortran is an acronym for FORmula TRANslation, and was originally capitalized as FORTRAN

PSIM: A Tutorial - . presentation outline. what is psim? circuit structure getting started with psim hands-on examples.

Efficient Modeling and Simulation of Multidisciplinary Systems across the Internet - Tutorial. efficient modeling and

Flow Over a Cylinder - . flow over a cylinder finite element tutorial by dr. essam a. ibrahim, tuskegee university,

Should a Fortran-savvy educator learn Java, Flash, both, or neither? - Funding: kavli operating institute nsf. per

FORTRAN PROGRAMMING PRELI MINARIES - . fortran is an abbreviation of formula translation it was introduced by ibm in 1957