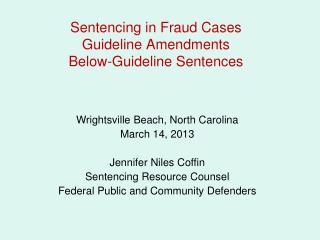 Colors I Like (in this presentation) - Anti-fraud and the internal audit function proactive measures for finding fraud,

The Amendments - . to the united states constitution. the bill of rights. amendments 1-10. background .

HAPTER 5 - . computer fraud and security. introduction. questions to be addressed in this chapter: what is fraud, and how

SAS 99 – Consideration of Fraud in a Financial Statement Audit - . the new fraud standard’s impact on auditors and

Fraud Examination - . accounting 537 m. popowits. enron. agenda. intro to fraud, what it is, what it isn’t, what it

Chapter 9 Sentencing, Appeals, and the Death Penalty - . crime in the united states. if a criminal defendant pleads

FINES as a sentencing option - . an overview of three types of criminal sanctions and their purpose so far you have

Amendments &amp; Famous Cases - . rap! write down all of the 1 st 10 amendments to the constitution you can think of