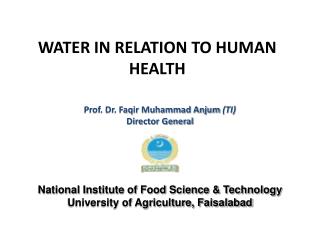 WATER IN RELATION TO HUMAN HEALTH WATER IN RELATION TO HUMAN HEALTH

Leave No Child With Special Needs Behind - . sponsored by: us dept of health &amp; human services / centers for

ANSC 301 - . animal health. diseases. any deviation from the normal state of health. accurate disease diagnoses is an