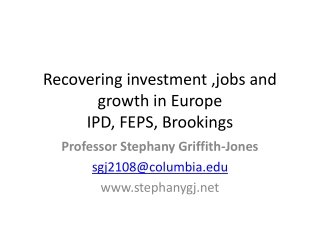 BARRIERS TO AND OPPORTUNITIES FOR INVESTMENT IN EUROPE - . john arney – managing partner. born out of a distressed

Recovering from the Crisis: A Global Jobs Pact - . challenges for global coordination on jobs crisis . engage actors in

Incontinence Wipes By IPD - Looking for incontinence wipes? save money and time by buying high quality wipes from