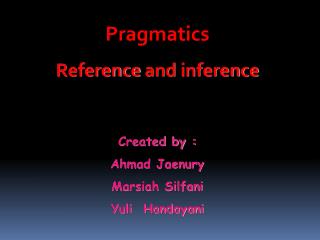 Pragmatics Reference and inference Created by : Ahmad Jaenury Marsiah Silfani Yuli Handayani. Reference is an act in which a speaker, or writer, uses linguistic forms to enable a listener, or reader, to identify something. These linguistic forms are called referring expressions. pragmatics - . from utterance to

On the role of formulas in the acquisition of L2 pragmatics - . kathleen bardovi-harlig indiana university pragmatics and

Pragmatics and Text Analysis - . lecture 6. pragmatics is the study of language usage from a functional perspective and