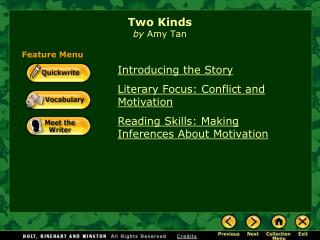 “Two Kinds” by Amy Tan - . rc page 9. quickwrite. is it possible to expect too much from another person? do you

Two Kinds – Amy Tan - . characterization. quiz: two kinds. what city is the setting? what is the name of the piano

Amy Tan - . 1952 --. personal life . born in california to chinese immigrants john, a minister, and daisy, who was forced

Amy Tan - . writing. her writing is very much related to events in her own life, and her stories have touched the

PowerPoint of Amy Tan - . by: tieley tsosie. biographical of amy tan. she was born in oakland california in 1952 to

Two Kinds - . by amy tan. warm up activity. what are some of the typical dreams and expectations that parents in your