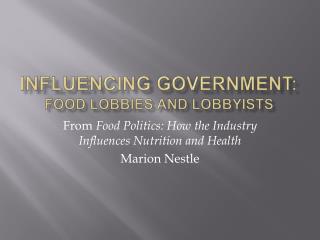 Influencing Government: Food Lobbies and lobbyists. From Food Politics: How the Industry Influences Nutrition and Health Marion Nestle. Goal. To understand how food companies are able to exert disproportionate influence on government agricultural and nutritional policy. What is lobbying?. Food, Soil, and Pest Management - . chapter 10. section 10-1. what is food security and why is it difficult to attain? .

Food, Soil, and Pest Management - . chapter 10. section 10-1. what is food security and why is it difficult to attain? .

Food Deserts - . what is a food desert?. definition : low-income communities without ready access to healthy and

Food Defense - . in a food preparation and service setting. courtesy of food technology magazine, from

CANADA’S FOOD GUIDE - . history of the guide the food groups recommended daily servings what is a serving.