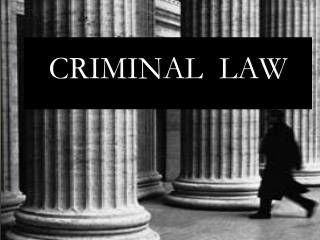 CRIMINAL LAW. http://www.lawyers.ca/statutes/criminal_code_of_canada_assault.htm. What is a crime?. Dictionary.com/crime. Technical definition:. Whatever Parliament defines as a crime. Any action, or omission of an action that is prohibited by law Ex. Action - stealing something Criminal Law - . crime – an act or omission of an act (failure to act) that is prohibited and punishable by federal

Criminal Law - . who decides what is a crime?. the federal government has the power to decide what constitutes a crime.

Unit 2 – Criminal Law - . lul4n1. in this unit…. learn about criminal elements of a crime who can be charge, when a

CRIMINAL LAW - . what is criminal law?. public law that declares acts to be crimes and prescribes punishments for those

Chapter 7 Criminal Law - . civil vs. criminal law. major differences:. classification of crimes. an act can have both

Chapter 1 Crime and Criminal Justice - . learning objectives. discuss the formation of the criminal justice system in

Criminal Law - . what is a crime ?. a breach of rules (statutes/ordinances) created by a legislative body. distinguishing

Do Now - . read the article silently to yourself and reflect on it by answering the questions. criminal justice i