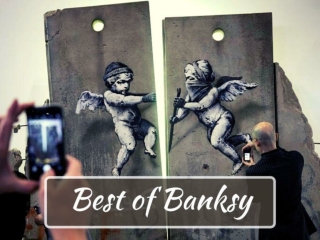 Banksy - . unknown artist spray paint stencils . he also directed a simpsons opening “couch gag”. if we can get on

Banksy - . banksys’ life. banksy was born in bristol, england in 1974 and he apparently started his career at

BANKSY - . banksy is an anonymous british graffiti artist. no one knows for sure who he is. people believe he is from

BANKSY - . first things first. do any of you know who banksy is?. he is. a street artist – this means he does art in

Banksy - . by jade mcmorrow period 1-a. biography. name: robert banks banksy is a graffiti artist from bristol, uk his