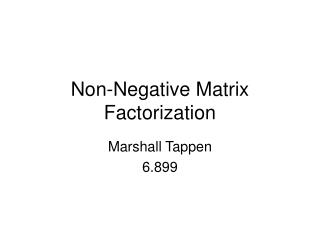 Non-Negative Matrix Factorization. Marshall Tappen 6.899. Problem Statement. Given a set of images: Create a set of basis images that can be linearly combined to create new images Find the set of weights to reproduce every input image from the basis images Stochastic Matrix Factorization - . max welling. smf. last time: the svd can do a matrix factorization of the

NON-NEGATIVE MATRIX FACTORIZATION FOR REAL TIME MUSICAL ANALYSIS AND SIGHT-READING EVALUATION - 1. 5. what is