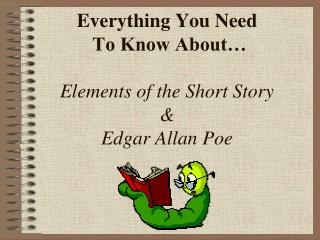 Everything You Need To Know About… Elements of the Short Story & Edgar Allan Poe. What is a Short Story?. a brief work of fiction where, usually, the main character faces a conflict that is worked out in the plot of the story. Setting. The time and location where the story takes place. Edgar Allan Poe - . “all that we see or seem is but a dream within a dream .” . brief background. born in boston on

Edgar Allan Poe - . north american literature i. “they who dream by day are cognizant of many things which escape those

Edgar Allan Poe - &quot;the death of a beautiful woman is unquestionably the most poetical topic in the