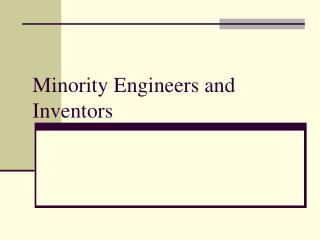 Minority Engineers and Inventors. Juan De la Cierva (Sept. 21, 1895 – Dec. 9, 1936). Spanish Civil Engineer Known for his invention of the Autogyro His invention was later utilized in the development of the helicopter. Mario Molina (March 9, 1943 – Present). Innovators and Inventors - . what are the possibilities for the future? hovercrafts? jet packs? what are the

Inventors and Scientists - . shale oil explorers challenge. why?. to develop a range of skills: research –

Inventors and Inventions - . recap. this time period begins just at the end of the civil war and is called the industrial

Inventors and Inventions - . by: peyton