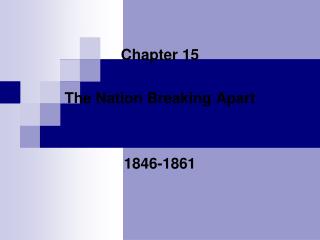 Chapter 15 The Nation Breaking Apart 1846-1861. Section 1 - Growing Tensions Between North and South Find Out: How the abolitionist movement heightened tensions between the North and South The controversies over slavery in the territories The Nation Breaking Apart 1846-1861 - . chapter 15. growing tensions between north and south. section one. north and

The House Divided 1846-1861 - . north vs south. north. south. n orthern states had either abolished slavery or put it on

Chapter 10: The Nation splits apart - . the big picture: after the war with mexico, one questions stirred national

The Nation Splits Apart - . essential question. what were the causes of the civil war? . expansion leads to conflict.

A NATION TORN APART - . in 1861, 11 southern states withdrew from the union and formed their own country: the confederate

A Nation Divided 1861-1865 - . this slideshow is part of a differentiated lesson created by betsy brown, melanie