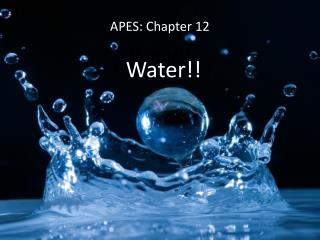 Water!!. Water!!. APES: Chapter 12. In Groups of 4:. What is the difference between: Aquatic Marine Limnology Freshwater How much of our world is covered in water? Fresh vs salt List @ least 5 ways humans use water. Freshwater First ;). Water, Water Everywhere! - . earth is the only planet in our solar system that has an abundance of liquid water. over 70%

Water, Water Everywhere ? - . lesson 3: an exploration of stakeholders and where we fit in. water in the world.

Water, Water, Everywhere! - . water trivia!. question 1: there is the same amount of water on earth today as there was 3