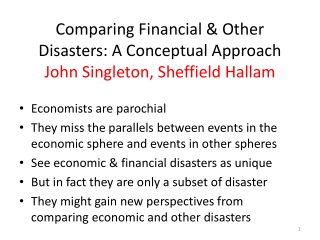 Comparing Financial & Other Disasters: A Conceptual Approach John Singleton, Sheffield Hallam. Economists are parochial They miss the parallels between events in the economic sphere and events in other spheres S ee economic & financial disasters as unique