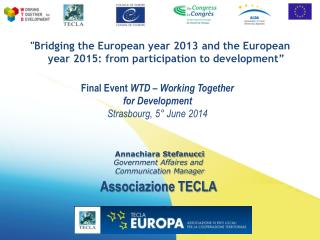 The European Year of Volunteering 2011 —Update— - . the full title of the year is … “the european year of

European Patents 2015 - . presentation by dr. robert harrison. the vision – european patents 2015. from the statute of

From the Common European Framework of Reference to the European Language Portfolio - . david little. overview. what is

From Citizen Information to Citizen Participation, from Local to European - Nacab ’ s approach to citizen

European First Year Experience Conference, 2014, Nottingham - . what can service learning offer to students and staff in