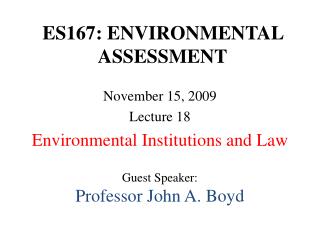 AN INTRODUCTION TO INDUSTRIAL ECOLOGY - . a2.3sr1 studies in sustainability 1. overview. what is ‘industrial ecology’

INTRODUCTION TO ENVIRONMENTAL IMPACT ASSESSMENT - . course learning objectives. at the end of this course you should be

ASSESSMENT - . a dr. production. pre-assessment assessment. what is assessment? when should assessment occur?.

ENVIRONMENTAL MONITORING CONCEPTS AND APPLICATIONS - . course learning objectives. at the end of this course you should

Beyond the Assessment Score: What Else Can We Learn from an Assessment? - . barbara fitzgerald m.d. frcp(c) developmental