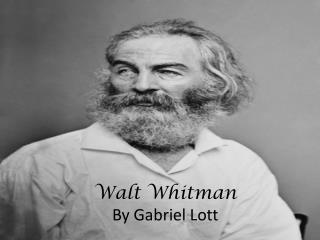 Walt Whitman - . america’s poet. emerson said…. “when will we have the poet that we need? this country deserves a

Walt Whitman - . “i hear america singing”. about walt whitman. born in 1819 on long island, new york he had eight

Walt Whitman - . by: sw, cc, sh. open ended questions…. how would he like modern day movies? what is his back ground?

Walt Whitman - . a few facts about whitman’s life. his father was a poor carpenter. most american writers had been born

Walt Whitman - . song of myself. section 1. “what i assume you shall assume” “observing a spear of summer grass”

Walt Whitman - . 1819-1892. “whitman was a curious mixture of the homespun and the theatrical; he had the earthy