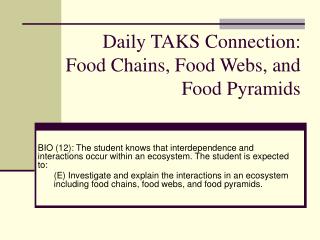 Daily TAKS Connection: Food Chains, Food Webs, and Food Pyramids. BIO (12): The student knows that interdependence and interactions occur within an ecosystem. The student is expected to: Food Chains and Energy Pyramids - . by: brianna shields november 1, 2004. do now. 1. which biome is characterized by a

Food Webs - . a food web describes the feeding relations among organisms in all or part of a community usually those

Food Chains and Food Webs - . animals in barnegat bay estuary. thousands of species of plants and animals live in the

Food Chains, Food Webs, and Energy Pyramids - . chapter 13, section 13.4. this is called an energy pyramid. it shows how

Health food and junk food - . we eat many kinds of food in our daily lives sometimes these food are healthy and

Food Chains and Webs - . study guide. carnivore: . animal that eats only other animals. prey. animal that is killed and

Food Chains &amp; Food Webs - . food chain vs. food web- what’s the difference?. a food chain is a diagram that

Food Chains - . by: ruby hames. what is a food chain?. a food chain shows the feeding relationships between organisms in

Introduction to food and the food industry - . food in modern society. food is essential to life. do we have too little

Food Chains &amp; Energy Flow - . food chains vs. food webs. food chains show the path of food from a producer to the

FOOD CHAINS and FOOD WEBS - . food chains are designed to show the direction that energy flows from producers to top