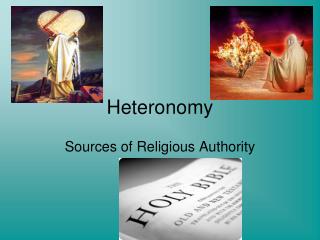 Heteronomy. Sources of Religious Authority. 10 Commandments…. Answer the following question honestly, and without discussing or conferring with one another. You will not be graded or assessed on the basis of your answers! Heteronomy - . the relationship between morality and religion. heteronomy. morality depends on religious belief (no