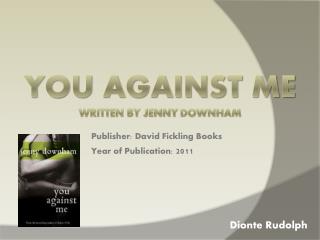 Before I die by: Jenny Downham Genre: teens - . tessa is a 16 year old girl, who has terminal cancer. she has only a few

By: Jenny - . what is manga ?. manga is a type of japanese comic book it consists of comics and cartoons it is also

His Banner Over Me Written By: Kevin Prosch - . ccli# 1119107. he brought me to his banqueting table (echo) he brought me

by Jenny Paden, jenny.paden@fpsmail - .org. 1a. the sum of 9 and r. 9 increased by r. give two ways to write each algebra

By Yosuke, Mathew, and Jenny - . vacuole . vesicle. vacuole is a type of vesicle. a vesicle is a small bubble enclosed by

How Credit Works Against Me - . citizens for responsible lending www.citizensforresponsiblelending.org. how credit works

Music Mania By Jenny Loher - . click on the band you want to learn about. evanescence. a dawn becoming. queen.

Written by: Greg Clevenger - . the story thus far. european nations were competing with each other for: world resources

Written by Sony Gala - . engr-ii-2: students will examine the core concepts of engineering and technology. construct a

Written by: Angelia Greiner - . who was charles dickens?. considered by many as greatest victorian writer prolific author